The following is a book review by Ethan Curley (Year 9)

Alex Sawyer is a bully. He’s spent his whole life bullying smaller kids, when his partner in crime Toby informs him of a house with the owners onholiday, it’s too good to refuse. Breaking into the house in the dead of night, Alex’s life changes forever. He’s surrounded by hulking figures dressed in black, they shoot Toby before making away into the night. Alex flees shaken by what he has witnessed and is shortly captured, but no-one believes what he has seen. Convicted of murder, his parents turn their backs on him, he is sentenced to life in Furnace Penitentiary, a newly opened prison after the proclaimed “summer of slaughter” where gangs ran riot throughout Britain. Thrown in with some of the darkest teens in Britain, Alex must break out of Furnace, along with his new gang of friends, he hatches a devious plan to escape and slowly uncovers the darker motives of The Warden and his Blacksuits.

A thrilling read which keeps you enthralled until the very end. Furnace follows Alex Sawyer, who is framed for his friends’ death and is sentenced to life imprisonment in this hellish prison. Furnace has everything a 13 year old lad could ask for in a book, guns, fighting, death and destruction along with bloodthirsty mutants and fierce friendships. This 5 book series is definitely one of the best out there.

Available in the school library as well as the sequel, please feel free to read; The Fury, The Inventors series, as well as the rest of the Furnace series, which are all by Alexander Gordon Smith 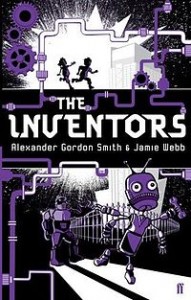